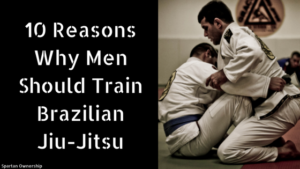 My Experience with Brazilian Jiu Jitsu

My experience has been amazing so far. I’ve been doing mixed martial arts consistently for the past 2 years now. Brazilian Jiu Jitsu (BJJ) has been the most fun yet most effective martial art I’ve ever trained. It has also proven to be quite safe. Most of the techniques can be safely practiced with minimal injury. I still haven’t had an injury yet even though I’m sure I will as the years go by but that’s part of the journey. BJJ has also given me a degree of confidence that I didn’t have before. I feel more capable of handling myself in a self-defense scenario. Did you know most fights eventually go to the ground? BJJ will help you with the grappling skills necessary to dominate!

I always say know your “WHY”, so here are 10 benefits of training BJJ:

BJJ will definitely help you develop more core strength, thicker tendons, and a thicker neck. BJJ will work out your body as a whole utilizing all the little muscles that you may not necessarily hit at the gym when lifting. The result is you’ll have more overall strength.

#2 Get Acquainted with violence

What would you rather be? A warrior in the middle of a garden or a gardener in the middle of a war? I rather choose the former. Although modernity has hypnotized men into outsourcing violence to first responders (police and military), you don’t have to be that way. Violence is and always will be part of what it means to be a man. A shift takes place in a man when he becomes acquainted with violence. He starts to awaken to the fact that he has something dangerous and strong within. This will help you become more fearless as you awaken to your inner warrior. BJJ is definitely a way to start becoming acquainted with violence since you’ll be rolling, choking, and submitting/being submitted by your opponents.

Most men these days barely engage in masculine activities anymore. The majority get their fix by sitting on the couch with a big bag of Cheetos killing fake foes on their xbox. Any type of exercise will boost testosterone to some degree. There are a few exercises that boost testosterone more than others like: Deadlifts, squats and sprints.

Now that we’ve spoken about the biological aspect, it is very safe to say that BJJ will help you develop your sense of masculinity. A masculine man is one who is strong, capable and courageous. BJJ will absolutely develop these masculine virtues in you over time.

#4 Increase Your Ability to Bond With Other Men

#5 Check Your Ego At The Door

BJJ will get real very fast. You’ll quickly be able to see who’s good and who isn’t. So if you have a superiority complex and your ego tends to get the best of you, BJJ will help you with that. There’s nothing like being tapped out by a 14 year old who’s been training for a few years. When you first get started, chances are that you’ll be getting tapped out and submitted for at least the first 2 or 3 months.

BJJ has personally helped me become a lot more humble and I find that virtue translating into other areas of life as well. Now when a friend has some constructive criticism or if I do something wrong, I find it easier to check my ego and own up to the situation. Spartan Ownership baby!

Something about your psyche shifts when you know you can choke someone out. You start to develop a certain presence. It’s a little hard to explain. But you basically start to carry yourself in a more masculine way. The better you get, the more quiet you tend to get. You’ll be less intimidated by the “show” most men put up to intimidate you. Deep down you’ll know them for who they are. You’ll be able to spot someone who’s dangerous versus someone who is just acting dangerous.

#7 Protect Yourself & Your Tribe

In his famous interview, Jocko Willink—a totally badass US Navy SEAL emphasized BJJ as the most effective martial art for self-defense. If one of the most elite warriors on the face of the planet says BJJ is your best bet when it comes to defending yourself, I would listen if I were you.

Therefore, it is safe to say that training BJJ will give you the ability to protect yourself and your tribe. On a side note, I will say that Jocko’s first recommendation for anyone looking to protect themselves is owning a firearm. A warrior needs to be able to use weapons AND do hand-to-hand if necessary.

When you first start training BJJ, you will be tapped out ALL THE TIME. There’s always a percentage of people I see who come in for their first time, and leave within 2 weeks because they can’t handle the lack of instant gratification that comes with the initial first months of training.

This is a great opportunity to develop persistence & self-discipline. It takes a high degree of self-discipline to keep coming in day after day, week after week, month after month and year after year! It hardens you as you simply keep showing up through the highs and lows of training.

This self-discipline will definitely translate into other of your life. You will find yourself being more persistent with the achievement of your objectives. You won’t give up as easily as someone who doesn’t viscerally understand self-discipline like you do.

I personally train about 2-3 times per week no matter what.

The self-discipline, physical demand, risk, humility and all of the other experiences you’ll having doing BJJ will absolutely increase your mental toughness! I will also add that it will increase your emotional and physical toughness too!

If you’re looking to become more mentally tough then look no further, training BJJ will aid you immensely. If you’re an overly sensitive man, doing BJJ will help you let go and be a bit more callus. So if you regularly find yourself crying over every little thing that bothers you, get ready to take it on the chin like a man.

#10 Be Better At Problem Solving

I was talking to my instructor the other day, and he said that BJJ is a more intellectual martial art compared to say—boxing. After a while BJJ really starts to become like a chess game especially if you’re up against someone who knows their shit.

Josh Waitzkin (arguably one of the best chess players alive today) is also a world champion in BJJ! He definitely recommends BJJ as a way to develop your ability to problem-solve.

When you’re rolling around with your training partner, you have to think clearly under the pressure and intensity of the situation. This will definitely translate into you being more decisive, more cool under pressure and a better leader and problem solver!

So what are you waiting for!? If you’re not training already, then look up the nearest MMA gym that has Brazilian Jiu Jitsu and sign up now!