10 Ways Soda Will Make You Weak 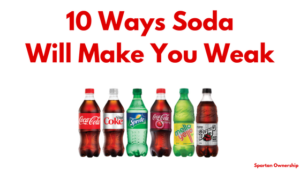 I was just having a workout session with my nephew today when he said he drank 5 bottles of soda yesterday. He said he felt like shit and ended up throwing up. He then proceeded to make a vow to himself that he would no longer ever drink soda. This got me thinking soda is so mainstream and people drink it like it’s water but they have no clue what they’re doing to their bodies.

My outcome is for you to be aware of the negative effects of soda and vow to drink it no more than once or twice a week. I want you to look at soda as if it is something that is insane to make a habit of drinking. Do this and you’ll be miles ahead of most who struggle with their health.

Here are the 10 Negative Side-Effects Of Drinking Soda:

#1 Soda Can Cause A Decline In Kidney Function

In an 11-year-long Harvard Medical School study, including 3,318 women, researchers found that diet cola is linked with a two-fold increased risk for kidney decline.

Soda contains high amounts of sugar. The average 20-ounce can of Coca Cola has the equivalent of 17 teaspoons of sugar.  Imagine drinking several of those a day? Woah.

Diet sodas contain mold inhibitors. They go by the names sodium benzoate or potassium benzoate, and they’re used in nearly all diet sodas. “These chemicals have the ability to cause severe damage to DNA in the mitochondria to the point that they totally inactivate it – they knock it out altogether,” Peter Piper, a professor of Molecular Biology and Biotechnology at the University of Sheffield in the U.K. The preservative has also been linked to hives, asthma, and other allergic conditions, according to the Center for Science in the Public Interest.

#5 Soda Turns Your Bones Into Jelly

#6 Diet Soda Will Make You Emotional

In diet sodas, aspartame is used as a substitute for sugar, and can actually be more harmful. It has been linked to almost a hundred different health problems including seizures, multiple sclerosis, brain tumors, diabetes, and emotional disorders.

Extra Fructose– Sodas contain High Fructose Corn Syrup, which obviously comes from corn. Most of this corn has been genetically modified, and there are no long term studies showing the safety of genetically modified crops, as genetic modification of crops has only been around since the 1990s. Also, the process of making High Fructose Corn Syrup involves traces of mercury, which causes a variety of long term health problems.

#8 Soda Literally Does NOTHING For You

Lack of Nutrients– There is absolutely no nutritional value in soda whatsoever. Not only are there many harmful effects of soda, but there are not even any positive benefits to outweigh them. Soda is an unnatural substance that harms the body.

Bad for the teeth– Drinking soda regularly causes plaque to build up on the teeth and can lead to cavities and gum disease.

When we eat sugar, dopamine is released in the brain, giving us a feeling of pleasure.The human brain is hardwired to seek out activities that release dopamine. Activities that releases huge amounts are especially desirable. This is actually how addictive drugs like cocaine function, and the reason people can become dependent on them.  As men, we need to condition ourselves to not be so addicted to comfort and pleasure.