How to Assert Your Dominance & Stop Justifying Yourself 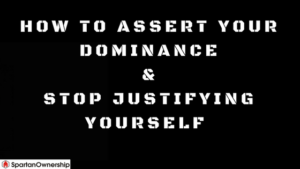 This is a tricky subject to talk about simply because it can be easily misinterpreted. However, this topic is very much in need in today’s marketplace of passive and emasculated men.

Justifying yourself is weak. Asserting your dominance is key because in today’s society, people are too nice. Especially men.

The primary goal should be to secure your own interests. You need to stop being apologetic for asserting your interests. You matter. People will respect you more for it too because it’s an overt communication of your value to them. Donald Trump said “People respond to you based on how you treat yourself” or another quote he said was “Your attitude is more important than your IQ”.

I believe that one of the reasons people respect you more based off of how you treat yourself is because they notice your high self-esteem. Once they notice your high self-esteem they know that you can’t be easily manipulated. Usually, people with low self-esteem are the first ones to put themselves down in favor of another person’s interests. People with low self-esteem are more easily manipulated because they are needy and crave people’s validation. When you crave people’s validation you are a slave to them. People can give it to you or take it away whenever they want to. Thus you have no control over that. You end up behaving in a manner that gets you the most validation. This is not a good mindset if your goal is to be a man who commands respect.

The other side of the coin is that it’s not always bad to seek validation. For instance, if you are in an honor group with other men. Sometimes you need to prove yourself to other people so that they can respect you and regard you as an equal. For example, all Navy SEALs had to go through brutal training together in order to receive their trident. That is an example of having to forsake your comfort and boundaries but the difference is that it’s for a very specific purpose: Becoming an elite warrior. It’s okay to negate your immediate interests if the reward at the end is worth it.

The instances in which you tolerate other people asserting themselves and disrespecting you need to be strategic. If you have a wife, three kids and bills to pay and your boss says something that you interpret as disrespectful, it may not necessarily be the right time to call him out on it. Why? The reward may be that you feel confident and good about yourself but then you lose your job. Not good. But that’s why you shouldn’t have a boss in the first place. Start your own business. But I know…that’s not for everyone and besides, if you work in an organization that you like, you might not even be faced with that problem. Plus, some bosses and colleagues are able to be called out without firing you. Once again, tolerating other people’s shit should be strategic and case specific.

Otherwise 99% of the time, the following is a good guideline:

“Treat people with respect and do not tolerate disrespect.”

When you’re justifying yourself you are trying to get the other person to approve of your decision.

There is a time to justify yourself such as when you are in a formal debate with someone and there is a goal at the end to see who is right. But in normal everyday life that is almost never the case.

Justifying yourself is weak and needy because it is often a way to avoid making your own decisions and taking full responsibility for your life. You may rationalize justifying yourself as a way of being nice and sensitive to other people’s needs. You may think that explaining exactly why you’re doing what you’re doing is necessary. There is some truth to that. I’m not advocating living a life where you just do whatever and don’t communicate with others. What I’m simply getting at is you don’t always need to justify yourself and when you want to explain your reasoning, you don’t have to do it in a needy/approval-seeking way. If you want to tell someone “why”, just tell them once and then shrug and do it. Fuck their approval. There’s a fine line between justifying yourself and being needy/approval seeking.

Like anything else, this mindset and way of life will be hard at first because you’re not used to it. But over time you will start to become more and more like this as you embrace the courage that it takes to get there. Don’t be afraid to make mistakes and if you take it too far, recognize that and tell the other person. I rather err on the side of being too bold and assertive than on the side of being too approval seeking in most situations. If you are a masculine man, this is a key trait to embody. The more and more you become in touch with your values as a man, the easier it will become to be assertive because you will know your priorities and you’ll be less swayed by other people’s interests.

Something went wrong. Please check your entries and try again.
Posted in All Posts, Social/Relationships