How To Breathe Like A Warrior and Stay Cool Under Pressure 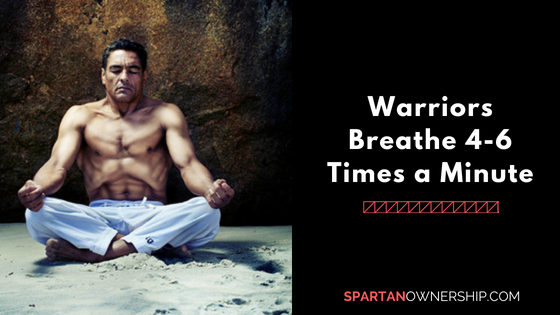 Warriors have always recognized the importance of breathing right. From U.S Navy Seals to ancient Japanese Samurai, they all practiced breathing. Most men fail to breathe correctly and therefore miss out on a tremendous source of power.

The truth is that most people are in a constant state of low-level “fight-or-flight” response. Fight-or-flight doesn’t only happen in extreme situations involving life or death. Fight-or-flight happens in seemingly trivial situations such as: waiting in traffic, arguing with a family member, being late for work, etc.

In today’s fast-paced world, research shows that people report being stressed quite often. On top of that, most people are “shallow breathers”. Shallow breathing is when you only breathe into the upper part of your lungs.

Shallow breathing is often caused by poor posture, stress, and conditioning. Infants actually breathe deeply using their diaphragm. However, as they grow older they slowly lose touch with their natural way of breathing and take on a more erratic pattern of breathing instead.

“Feelings come and go like clouds in a windy sky. Conscious breathing is my anchor.” ― Thich Nhat Hanh

In order to truly understand why you should start breathing correctly,

Your body has what’s called an “Autonomic Nervous System”.

The sympathetic nervous system functions like a gas pedal in a car. It triggers the fight-or-flight response, providing the body with a burst of energy so that it can respond to perceived dangers.

The parasympathetic nervous system acts like a break. It promotes the “rest and digest” response that calms the body down after the danger has passed.

The enteric nervous system sometimes called the brain in the gut, also plays a role in how the body responds to stress. This system regulates digestive activity. The body experiences intestinal distress when faced with stressful situations. This can manifest in digestive disorders such as colitis and irritable bowel syndrome stem from this system.

Elevated cortisol levels inadvertently contribute to the buildup of fat tissue and to weight gain. For example, cortisol increases appetite, so that people will want to eat more to obtain extra energy. It also increases storage of unused nutrients as fat.

Most people don’t know how to put an end to their stress so elevated cortisol and adrenaline become their norm. And if you look at today’s disease rates, then you’ll see that most of it comes from high blood pressure and other heart-related complications.

This Is Where Learning How To Breathe Comes In:

Breathing does much, much, more for you than just induce a relaxation response. It also detoxifies your body. Your body gets rid of something like 70% of toxins through breathing. When you exhale, carbon monoxide comes out carrying toxins. When you’re not breathing properly, you often unwittingly withhold these toxins in your body.

There is even a beginner, intermediate, and advanced level. I suggest you get the paid version since it allows you to have more options. However, get the free version to try it out.

Click this link for a breathing exercise you can do right here and now. It’s called “tactical breathing” because soldiers use it in stressful situations in order to gain control of their state. I suggest you try it out for a minute or two right now.

My life has changed dramatically ever since I’ve learned the power of breath. Now instead of being a shallow breather, I constantly breathe deeply and fully. This results in a feeling of calm control over my body and mind. “Relaxed control and power” is the best way to describe it. What are you waiting for? Master your breath and master your life.