Tactical Breathing On An Airplane 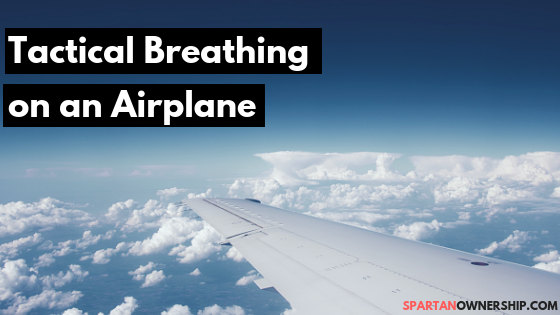 Tactical Breathing on an Airplane

As I was flying through the skies, I sat still breathing deeply.

I knew that doing controlled breathing would slow down my heart rate and make me more grounded and relaxed throughout the flight which would contribute to my being calm during turbulence as well as put me in a mentally clear state of mind so that I can engage in creative thinking during the flight.

This is a technique known as box or tactical breathing and it is well known in the special forces and other first responder communities as a way to train for arousal control which is a useful trait for warriors.

I decided to challenge myself further and do the following sequence for 10 rounds which took approximately 4.9 minutes:

It was a bit tough at first as my previous bodily functions weren’t used to this kind of pressure so the initial reaction was to gasp for air.

I overcame the impulse by simply embracing the discomfort and holding my focus on the sequence.

As I was breathing, I noticed my mind would start to wonder.

All kinds of thoughts would enter my awareness.

Thoughts that weren’t very resourceful, to say the least.

A habit from years of undisciplined focus and thought patterns.

I focused my awareness on my breath and took control of my internal self-talk telling myself that on every inhale, I was inhaling positive energy, great health, vitality, and strength.

On every exhale, I imagined that I was letting go of toxins, negativity, reactive thinking, fear, insecurities, and weakness.

I firmly believe that breathing in this way is a powerful way to shed weakness and take control of your internal experience which subsequently impacts your external reality.

As within so without, as above so below. – Hermes

I recommend that anyone reading this who’s interested in more powerful tools for their journey of self-mastery should check out the following:

The app has in-depth explanations as well as a neat interface that tracks your progress.

Just Breathe by Dan Brulé – An awesome book from one of the world’s top breathing experts.

Dan Brulé is a personal coach to many high-performers including Tony Robbins and Mark Divine.

Check out my podcast with Dan Brulé here.

Check out 10 things I learned from Mark Divine here.