When Is It Time to Change Your Mission? 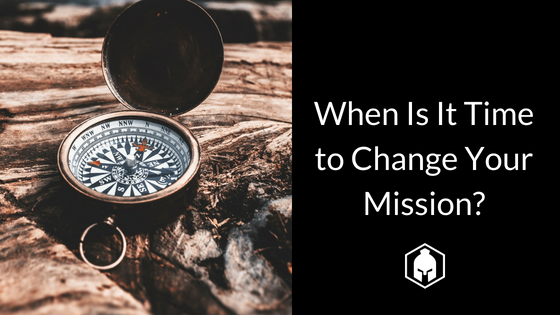 Over the past few days, I had some interesting insights concerning a friend. Let’s call him Eric. Eric has been on the path of self-mastery for a few years now and he has been training his mind and body with discipline by doing meditation, martial arts, going to the gym, and more. The reason I bring his training up is to say that his intuition and sense of purpose is more refined than the average J0e.

Although he’s been studying it and talking about it for quite some time, he hadn’t actually spent any time reaching out to clients and putting himself out there. After an accountability meeting, I had with my inner circle, the guys and I decided to put him to the test. We gave him a 30-day challenge where he had to reach out to 10 clients per day every day for 30 days.

After the first week, he was showing signs of procrastination and not being able to follow through. The consequence for a missed day was $35. He started off pretty strong but a week in and $70 later, it was almost as if he was just handing me the cash.

This shed some light on a few things and struck me as bizarre. Here was this guy who spent over a year planning, prepping and talking about running his own social media business but when he was finally put to the test, he didn’t follow through even when money was at stake!?

He started expressing doubt regarding social media marketing to be his purpose. He started talking about how he doesn’t really feel connected to it and how he wants to be doing something with passion and a higher purpose like I’m doing with Spartan Ownership.

Long story short, he quickly started disengaging from social media and surprisingly he felt no regret regarding the idea of moving on from it completely and replacing it with something more near and dear to his heart.

This reminds me of what David Deida said regarding a man’s purpose being similar to an onion that one must peel in order to get to the core. The deeper you go, the deeper you are connected to your purpose. If you feel no regret at all and surprisingly light at the idea of moving on from your current endeavor than chances are that you’re right and it’s time.

Anyways, when Eric was put to the test, his lack of resolve/purpose immediately became apparent. But instead of judging him as lazy and weak for not being able to follow through on his commitment, I believe putting him to the test and seeing him fall off was a good way of testing his resolve. Now that I see that it’s not there, it’s time for him to peel back another layer of the onion. Now he’s actively seeking a mission that fires him up more than just launching Facebook campaigns for restaurants. Now he’s talking about creatively combining his passions including music, martial arts, and meditation.

And I ask you to do the same. Sometimes you have to put yourself to the test and see if you have the drive to push through to the next level in your chosen endeavor. If you don’t then you should probably look at your lack of resolve and ask yourself why you aren’t following through. Chances are that your mission isn’t deeply engaging enough to move you.

Something went wrong. Please check your entries and try again.
Posted in Masculinity/Mindset