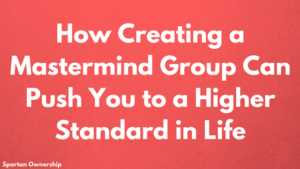 It’s amazing how many of us don’t take advantage of the power of mastermind groups. So many of us just isolate ourselves on our computers. I invite you to explore the possibility of creating a mastermind group that you meet with regularly. This could be online but I recommend doing it in person as it’s power increases tenfold that way.

What is a Mastermind Group?

It’s a group of like-minded men that you meet with regularly. And I say “men” because I mean that no women should be allowed in. Allowing women into such a group is a killer for a group of men who are focused on accomplishment, accountability and enhancing their masculinity and vision in life. Women will add a quality of presence to the room that will mess with the overall masculine frame that you should have to have a really good mastermind group.

How I Built a Badass Mastermind Group

I have a mastermind group here in my town. The first step I took was to go on meetup.com…It’s a great website because it allows you to create a group and people in your area will see it and have the option of joining in.

You can then title the group “Men’s Self-Improvement Club” or something along those lines. This will attract the type of men you want which are men who are action-takers and passionate when it comes to creating progress in their lives.

You don’t want guys that are taking no action and guys who are just their to fuck around and have fun. The first meetup I did a while back had 3 guys show up. We met in Starbucks and well…it was a pathetic situation.

The 3 guys in the group were all above 40 years old (age isn’t the issue though). And all of them were out of shape, had shitty job situations, and weren’t taking any action to make their lives better. It was pathetic. I already knew that this group wouldn’t work because I would end up spending too much time trying to motivate them and they wouldn’t be good additions to the group.

If anything all that they would be is leeches. They would leech my energy and time. Maybe some of them could have been great but I’m not trying to waste my time on men who have never done anything to take ownership in their lives. It’s too much of a time commitment. The only way I would take on such men is if they were to pay for my coaching.

You want prequalified guys in there. Not old dogs who are gonna take forever to learn new tricks.

One of the 3 guys dropped out because let’s just say, he displayed inconsistent behavior. He was mostly all talk. That’s another thing to watch out for: Beware of guys who act super excited in the beginning. Over-excited guys are usually too emotional and don’t have the discipline to show up consistently. The point is don’t be impressed by someone’s words, rather be impressed and value people’s actions.

The accountability group has been going on pretty much on a weekly basis now for about 4 months. And it 100% has increased my productivity, happiness, focus, and discipline. Not to mention, it’s FUN! It’s awesome meeting up with a bunch of like-minded guys every week and getting FIRED UP for our dreams!

It helps to set up an official time and place every week. You’re gonna want stability otherwise people’s circumstances will get in the way. We meet every Wednesday at 5:30 at my house. Everyone pretty much knows in advance that Wednesdays at 5:30 are taken.

I have an nice big basement where we do the meetups. It’s roomy and there are a bunch of couches and stuff. So we put on some inspirational music and start the group.

Also, I always make sure that the meetup has a clear outcome. We don’t just sit around and complain about our lives or just meet to joke around. The outcome of our group includes the following:

However, what we do isn’t all that serious all the time. After we get fired up, strategize, set up some challenges, etc, we usually have some sort of “sit down and chill period”. Maybe we’ll go out and smoke some hookah at a lounge and get a few beers. Another chill out activity we do is smoke cigars. And we just shoot the shit for a while and have some laughs. It’s really an awesome time because we get really focused and fired up about our visions! And then we end it with relaxation, hysterical laughter and fun conversations!

So it’s simple, go to meetup.com, create a cool sounding group name, screen for people and make sure that they’re interested in self-development and aren’t broken down 50 year olds who just came to talk and waste more time. You want motivated guys who are passionate about growth and hungry to take action! You will make mistakes, you will meet people who are time-wasters and are destined for failure but it’s OK, it’s all part of the process.

Ultimately, if you guys keep meeting up in this mastermind group, you can make some amazing friends, amazing connections and go places together. We were thinking about going on a camping trip sometime in the summer in my group. I’ll let you guys know how that one goes.

A Group into a Gang

And hell maybe one day, once you’ve got enough members and you guys are really like minded and close, you can start some sort of gang/tribe. You can give yourselves a name and create a code of ethics and an ethos. And it could be really fun.

“Ultimately the way of men is the way of the gang” – Jack Donovan (author of the Way of Men). And when I say gang/tribe, I don’t mean for criminal behavior. I mean a gang/tribe of men on whom you can always rely on and train with to become stronger.

If you are a man then the concept of starting a gang should really fire you up. Although you may feel insecure on some level. Mommy said gangs are bad but that’s not always true. Criminal gangs are bad yes. But good ol’ fashion gangs of like-minded men in the pursuit of self-improvement exist everywhere and truly add an amazing dimension to our lives. Just look at the Freemasons, college fraternities, various political organizations, sports teams, the military, etc.

Men are wired to be part of a tribe. Don’t worry, you may feel like it’s a stupid idea because you don’t want to belong to a group or anything but I’m telling you that this concept is worth exploring. A lone-ronin can only get so far on his own. Eventually you will want to either start or join some sort of group. You will see the power to be accessed by doing this. It’s truly amazing….

Let me know how it goes for you or if you already have experience doing this, I’d love to hear your thoughts. Also check out the book “The Way of Men by Jack Donovan” for more information on how to start a tribe. Also, Master Chim has some amazing resources as well on this. Go to Thewarriorproject.com and check out his content on “The Loyalty Matrix”. It’s amazing stuff and gives you everything you need to know to start a tribe.

Something went wrong. Please check your entries and try again.
Posted in All Posts, Social/Relationships