How to Deal with Immense Confusion about Your Purpose 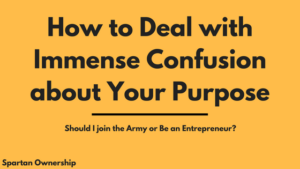 Sometimes in life, you go through periods of confusion and ambiguity. Life isn’t always so clean cut. These periods can make you go crazy if you’re not disciplined.

Recently, I kept having this urge to join the military. I would spend hours looking at military videos, articles and forums to see if it was a good idea.

I would usually end up thinking that joining the military just isn’t worth it for me and brush it off. Then I would get this urge again and I would end up brushing it off again.

This happened at least 6-7 times.

But then I realized that governments were rarely if ever trustworthy throughout history.

I’m almost 22 years old and I started to tell myself:  “it’s now or never!” I started to seriously consider joining.

This threw me into a serious tailspin.

I really wanted and craved the military experience, adventure, challenge, training, and brotherhood. I figured that it would serve as a great stepping stone for my life.

I started to imagine coming back into the civilian world with a vengeance and killing it in the business world.

And a lot of the military spec-ops guys didn’t trust the government that much either. They just served for their own reasons…some of their motivations were patriotic while other guys had their own reasons for joining…

I felt very off and unbalanced because I didn’t have a sense of certainty and direction. I was hesitating between military life or continuing my life as a citizen and entrepreneur. I mean I was training here at home as well: going to the gym, going to MMA, shooting my gun at the range, learning psychology and philosophy, meditating, taking cold showers and challenging myself in a myriad of other ways…

I wasn’t sure if the military was all that it was set out to be. What if most of it was hype? I spoke to a lot of friends who served and they all said it was a great experience but there was a lot of bullshit…they make you clean toilets and you spend a lot of time just cleaning and maintaining stuff.

The confusion was huge.

“The warrior acts and the fool reacts” is a saying by Dan Millman that I often quote in my articles. I reacted to the confusion by engaging in self-destructive behavior.

My theory is that in times of uncertainty, junk food and meaningless pleasure provide a sense of comfort and certainty. When life is uncertain, when you’re faced with difficult decisions, comfort food is especially attractive because you KNOW you’ll get a pleasurable sensation from it.

It was a really tough call. I felt like I had no purpose and it was tearing me apart inside because I was presented with two very different life paths.

I ended up seeking counsel from lots of people: Army special forces guys, former Marines, life-coaches, forums, recruiters, friends and family. I got very mixed opinions from everyone. A lot of the military guys were trying to get me to join but some of them weren’t as enthusiastic about it.

Plus the military is a huge commitment.

The minimum sign up time is 8 years. Even if you only go in for 2-4 years active, you still end up being in the inactive reserves. This means they can call you anytime during the remainder of your 8 year contract. So if I started a business after my 4 years or whatever, they could still call me for a deployment completely throwing my business off balance.

I finally made the decision after a lot of research and advice-seeking. I decided not to join. And this time I mean it.

I could have come across my decision without going into a self-destructive tailspin.

Dealing with confusion is a great opportunity to cultivate the virtue of patience.

Remember that in order to come to an answer, it may at times be painful but you will eventually decide. Develop your ability to choose your reaction. Self-sabotaging will cause you to become more impulsive and less clear mentally.

Confusion is part of life. Life is messy. Life is hairy. Life isn’t always very clean cut and clear. There will be a lot of ambiguity, paradox, confusion, etc… My belief is that a warrior stays grounded even during these times of confusion. A warrior can be cool under pressure…he could be the eye of the storm.

This was a great lesson for me:

Be patient…the answer will come.