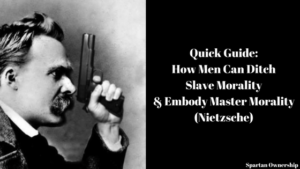 The more I study strong and powerful men of virtue, the more I hear about Nietzsche. Friedrich Wilhelm Nietzsche was a German philosopher born in 1844, whose work has profoundly impacted Western philosophy. Once I started to really explore his work, the reason for his fame within circles of strong men was apparent.

One of the most fascinating and paradigm-shifting ideas that he brings to the table is that of Slave Morality and Master Morality.

The purpose of this article is to help you purge aspects of both moralities that are making you weaker and less effective. Chances are that you embody a slave morality more than a master morality. Ponder the following ideas deeply and you will start to get a feel of how to balance the two moralities for optimal performance.

Is It Any Secret Why Nietzsche Dismissed Christianity As A Slave Morality?

Nietzsche was infamous for dismissing Christianity as a slave morality because if you study the Bible, you will find a lot of praise for slave morality characteristics. Nietzsche instead favored philosophies that resulted in the empowerment of man instead of the depreciation of him.

Nietzsche would often refer to Greek gods giving us an idea that paganism and polytheism as practiced by the ancient Romans, Vikings, and greeks was a system that embodied Master morality to a better extent than Christianity and other similar religions.

The Balance between Master & Slave Morality

If you look at the two different moralities, it becomes apparent that there needs to be a bit of balance. If you embody Master morality to an extreme, it’s the equivalent to being overly “alpha” in a sense. At times, you need to be a bit “beta” and put aside your competitive/aggressive side.

Therefore, it is up to you to find the balance that works for the environment and people you’re around. If you’re a Zen monk, you may want to put aside your egotistical/dominant side.

Also, if you want to maintain a great relationship with a group of men, you need to be able to check your ego and be humble at times. There are many examples when slave-type characteristics actually benefit those seeking personal growth and mastery. Once again, this will be a process of discovery in which you do your best to modulate between the two different moralities in the goal of optimum balance.

Slave Morality – The Mindset of the Herd

The moment I start to describe the last man, you will recognize the fact that the Last Man is all around you.

The Last Man is a creature of fear and mediocrity. He is afraid of death and injury and his only aim in life is to decrease hardship and strain so he could relax in a cocoon of comfort.

The Last Man is arrogant and proud of his comfort never bringing into question his own values and lifestyle. He equates happiness with comfort and instant gratification. His existence has no glory whatsoever, and can easily be symbolized by the fat man passing out after another day of binging on junk food, and Netflix.

The Last Man is a herd animal and doesn’t like any form of challenge or adversity. His existence is the same as every other last man. This type of man dismisses those striving for higher existence as “mad”. This is due to the fact that the last man lacks the capacity to be self-aware and evaluate himself.

The slaves are inferior beings who feel powerless and impotent in the face of life’s challenges. This feeling of impotence creates a feeling of “ressentiment” (a term Nietzsche coined). The term is meant to illustrate the “envy” that takes place within these types.

Slaves respond to their feeling of inferiority/impotence by congregating with other slaves and obtaining a “communal feeling of power” — the only power available to them. Under the guise of calls for “equality”, slaves seek to bring higher beings down to their level by constructing a slave/herd morality.

They are “the vengeful disguised as judges”. They can’t stand seeing a person excel so they guilt you into mediocrity and comfort like them—”who do you think you are?”, they might say. They may also make light of your drive to a higher ideal by dismissing it as a waste of time.

This is easily reflected in the family members, and friends who start to “show their true colors” as your passion for self-improvement and life mastery increases. It is common for you to reassess your peer group because you find, that you just can’t relate to your old friends any longer. You will start to dread the usual Friday night out with friends where you get together and numb the pain of life away by drinking, and smoking. Say goodbye to the herd…

Creative Geniuses and The Dawn characterize the opposite of the Slave and the Last Man. These individuals tend to embody the characteristics of Master Morality.

Creative geniuses are the men who scale the heights of greatness. These are the great artists, entrepreneurs, warriors, spiritual masters, and other men who leave behind outstanding works of beauty and history.

Thanks to a rare combination of talent and discipline, these individuals bring massive value to the world and are usually rewarded for doing so through fame and riches. These men often continue to impact the world in a myriad of ways after their death.

The Higher Life Might End Up Being A Harsh One

Nietzsche urges higher men to overcome the temptations of the herd. By doing so, the higher man will not only achieve his potential but inspire other men to do the same.

However, the amount of momentum behind herd morality is HUGE. Thus, higher men will definitely face massive resistance from within and without. We live in a society that promotes herd morality, so therefore your conditioning, as well as the people, andthe media that surrounds you, will oppose you.

You have been warned, the battle ahead of you won’t be easy but it WILL be worth it. Anticipate pain and discomfort but remember: Respond to pain in an empowering way. The warrior acts, the fool reacts.

This is the time when the voices of slaves and last men will sound dangerously seductive. This is why Nietzsche deems herd morality as the “danger of dangers”.

“Good is the enemy of great. And that is one of the key reasons why we have so little that becomes great. ” – James C. Collins

(This article is dedicated to Master Chim for he has helped me grow as a man). Check out the Warrior Project here.