Eastern or Western Philosophy? The Switch I Made to Have a POWERFUL Mindset 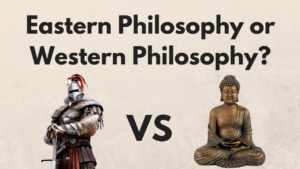 Recently, my mindset has become a lot more POWERFUL thanks to some changes I made. I used to be extremely fond of Eastern philosophy and spiritualism but am now moving more towards a Western mindset and philosophy.

When I first began my journey of self-development, I was really attracted to Eastern thought. I would imagine monks and how badass they were. I would imagine how dedicated they were to their pursuit of enlightenment.

I would romanticize the idea of a master zen monk who just KNEW something the rest of us didn’t…something he had to work for in order to attain. This imagery was powerful in my mind and drove me to really study and read as much as I could about Eastern philosophy and spirituality.

I would read philosophers such as: Eckhart Tolle, Osho, Bruce Lee, Alan Watts, and others who had a primarily Eastern mindset. And I found tremendous value in those teachings and am nowhere near understanding them in their entirety. But I have dedicated a lot of time into really understanding meditation and other practices so I have a decent understanding if you will…

However, recently I dove into philosophers and thought leaders such as Tony Robbins. And I have found a source of fulfillment that is truly amazing! This led me explore even deeper and now I can say with certainty that my life has changed…especially after diving into the teachings of Tony Robbins.

Robbins is a vehicle for massive transformation of the human mind. The man is a vessel for unlocking peak potential and performance in people. His teachings cannot be taken lightly. He has massive experience, massive understanding and a track-record that is second to none…

Tony Robbins and other leaders of that nature have touched on something that I haven’t realized until now. Even on his 80th birthday, the Dalai Lama said that “Meditation and chanting is fine and all but at the end of the day it comes down to action, action and ACTION!”

And what I have found is that teachings from guys like Tony Robbins really focus on controlling the mind, emotions, body, and coming up with a vision, purpose and ACTION plan in order to live life with passion and perform at peak potential! There is more to his teachings than this but in one sentence that’s all I can muster.

This is HUGE because Eastern thought doesn’t fill the void as deeply in my experience.

I also realized that Eastern thought was written for Eastern people. The West and the East both have different people and hence lifestyles. Historically the West had a bigger focus on industriousness, freedom and the accomplishment of our goals and dreams. Meanwhile in the East people focused a lot on meditation, chanting and compassion..

That is all changing now but that was certainly the trend before. Hence we have a different and more active mindset. Meditation and other Eastern practices tend to be more passive in my experience.

In summary, I’ll use a metaphor to describe my shift: I’m moving from the East to the West but with my bags packed. I have definitely learned a lot from studying Eastern thought such as the importance of being PRESENT and mindful. I have also become in touch with my intuition, nature and consciousness/stillness thanks to Eastern thought.

But now as I seek to truly master my mind, perform at my peak and rewire my brain to be a dream-to-reality creation machine…I am leaning more towards philosophers of the western world.

Tony Robbins beats 99% of others mindset masters and therefore most of my time will now be focused on learning from him. Warren Buffet says that you should ignore 99% of people but once you find that 1%…that right mentor…then listen to EVERYTHING he has to say and APPLY it.

To be held accountable and be disciplined like NEVER before…check this out.