How to Become More Powerful by Connecting to Your Roots 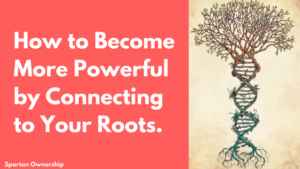 Let’s face it, today we live in a weird world. The number of people wanting to get a sex change in Sweden is doubling each year. Bruce Jenner got a fucking courage award on ESPN (previously a men’s sports channel). And the United States and other countries becoming more and more diluted due to mainstream culture and mass immigration, how does a man feel grounded in this world?

I have found that a powerful way to become more grounded is by reconnecting to one’s roots.

I began asking myself questions such as:

Who were my ancestors?

Who were the great men in my family?

What traditions did they have?

What did they believe?

What battles have they fought?

What were their ethics and codes?

What heritage/culture would you rather belong to?

The one that your culture has built over a millennium?

Or would you rather belong to what you see today:

Which culture do you think contains wiser codes of ethics and traditions that result in your empowerment?

Would you rather glorify the wise warriors, poets, and sages who came from your people or the straight up dog shit they’re shoving down our throat today?

I used to be against religion and ideology and I still am to a good degree. But I have found alternative ways of thinking and seeing the world that has helped me grow stronger.

I am more grounded than ever because I have taken the time to understand where I come from.

Socrates is known to be a great philosopher and I do agree that he was of course very wise. But not everyone sees his story the same way…

Socrates was put to death because he was constantly asking people questions and challenging their ways of thought. The problem is that he never offered any solutions.

That is why the ancients put him to death. They knew that half-knowledge was dangerous and that making people rebel against traditions and culture would be the death of strength within a people.

Traditions are a complex code of heuristics and knowledge passed on from generation to generation.

I am not saying to follow dogma blindly. As Miyamoto Musashi said, “Do not act following customary beliefs.”

My invitation to you is to connect with and glorify the great men of your culture. By pursuing this route, I believe that you will find a strength that can’t be matched by what we’re being told to do.

Where else will you get answers and strength?

Yes, be a rebel. But be a rebel of the crap we are being hypnotized to desire instead of the strength to be found within your people.

I urge you not to become religious but simply to become more curious about your roots,  no matter which country or race you happen to be a part of.

Eat the fruits and spit out the seeds. Follow your culture to the degree that it helps you feel grounded and empowered. Discard the aspects that don’t serve you.

When diversity ceases to exist, everyone will be the same and we will not feel the honor, legacy, and pride that comes from our roots.

You are not an aimless tumbleweed drifting in the desert dunes waiting to be snatched up by whatever trend the marketers create for us.

Be a rootless tumbleweed or be a stronger, better and faster version of your roots: A man who proudly carries the flag of his ancestors but uses his own reasoning to determine what is right for today’s society.

By understanding your cultural narrative and knowing that you come from strength, you will feel empowered and the story of weakness you have been told your whole life will cease to chain you.