Lessons on Masculinity & Being A Renaissance Man from my Father 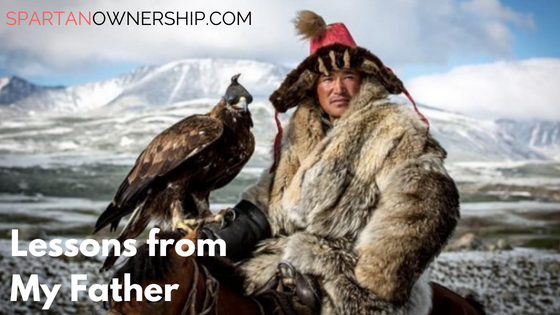 I had a great talk with my father today. He lives far away in Kazakhstan. Why there of all places? My dad is unconventional in a lot of ways and that’s part of what makes him unique. He’s probably from where I get my drive to rebel against the norm. Before I tell you why he lives in Kazakhstan, let me give you a glimpse into my dad’s story…

He was born in France in the mid-fifties. He was the son of a wealthy entrepreneur and a housewife. He was also the youngest out of his four siblings. When he turned seven years old or so, his parents sent him to a boarding school in the mountains of the south of France, as was the thing-to-do at that time.

It was one of those religious boarding schools where the nuns hit you with a ruler when you messed up a word during morning prayer. He wasn’t very interested in following the same route as everyone else. I mean he did well in school but never really felt drawn to the path most of his peers ended up taking (usually lawyers, doctors or businessmen). He was interested in the arts and the more subtle things of life. He didn’t feel like he belonged amongst the sheep. He was a romantic..a rebel. (Sidenote: He calls me Maki which is a dense forest in France where rebels were known to seek refuge). Did I mention that when he was 14 years old, he stole his teacher’s car and drove it cross-country because he missed his parents? I will then add that he has a big heart too.

He went to college in Paris, where he studied art and theater. He then worked in the film and theater industry as an actor, director, scenarist, etc…(He actually met my mom at a Broadway show that he wrote in the late 80’s.) His older siblings went on more traditional paths when it came to their work. They became professionals in the conventional sense of the term. They were more “practical and materialistic”, not in touch with more intangible aspects of life, at least to the degree that he was…

Fast forward a few decades, wives, and children later to around 2007 or so. I actually lived with him for a few years in Belgium (my mom had had enough with me and decided it was time I live with my old man). There, he had a wife and a daughter (my stepfamily) with whom I lived for 3 years. It was a nice existence. I had daily family dinners and my own room (things that were foreign to me in NYC). But, something was going on in my dad’s head…something that my 12-year-old brain couldn’t understand at the time. He was feeling a lack of energy..a lack of life..a lack of freedom…

There he was. He had done most things “right”. He had the house, the wife (8-year marriage), daughter, and a son but he was missing something… His artistic spirit felt constrained by his existence. One aspect of this void he was feeling was due to the growing influence of feminism and the emasculation of men. He felt a lack of polarity within himself, his woman, and his world. Society was (and still is) degenerating and he felt stuck. This jail of routine, society, brainwashed feminist ideologies, is a jail that a lot of men feel trapped in. The worst part is that most men lack the wherewithal to break out of it. Every once in awhile, modern men might fantasize about breaking out of this cage but more often than not, today’s men retreat with their heads down and their shoulders slouched.

Some men..men like my father had the BALLS and the type of spirit to break out of it!

In the midst of all this frustration building within the mind of my father, he was shooting a documentary on the Djigit warriors of Kyrgyzstan. [photo above]

He wanted to capture the essence of these people on camera before they had a chance to be sucked into mainstream culture and become another bunch of Starbucks-sipping, bitch-to-their-women, castrated, feminized unicorns.

While on his trip there, he felt connected to these people and felt an aliveness within them that he hadn’t experienced for years. These people were a rowdy bunch well versed in the arts of hunting and nature yet they had a presence that implied sensitivity to the world and a more authentic existence.

He felt connected to the country and to the people. He felt inspired by the beautiful feminine women proud of their femininity. They are a mix of Russian, Eastern-European and Asian.  [example below]

He ended up staying a bit longer than planned..then a bit longer..and a bit longer…Till he eventually met a beautiful woman in the international airport there. Now mind you, my dad was in his 50’s at the time and he still had “it”. Not to mention that he looks young for his age. He ended up falling in love with this woman who was in her late 20’s and started to plan on how he was going to make things work. Which resulted in him divorcing his wife in Belgium and leaving his life of routine and convention to live in Kyrgyzstan. Shortly after he got married to this woman and they had a kid (my step brother).

I can go on and on about the different aspects of what makes my dad amazing but here are a few key things: The first thing is that my dad has a glint in his eye. A glint of a man still on the journey and adventure that is…Life. This is the glint of a man who hasn’t thrown in the towel as most men his age do. This is a man who is living a life of true-power. He does what he wants, with whom he wants, and where he wants. Now this isn’t to say that he is winning everywhere. He does at times struggle with business and things of that nature but he shines through it all like every man should when facing adversity.

He is a good example of a renaissance man. A man who is well versed in the arts yet isn’t some new age wimp, all spineless, smiley, and starry-eyed. He had the courage when it came down to choosing his purpose over “the right thing to do” according to feminist conditioning, familial influences, society as a whole, etc…

And every once in awhile through Skype or in person, we have a great talk..a talk on life, society, women and culture. One of my favorite topics is the “pussification of men” and their lack of “geule”. “Geule” is a french word my dad and I use to describe men who have a face that shows freedom and strength, a face that bears intelligent eyes yet a weathered skin depicting toughness and wisdom.

I always look forward to sitting down with my dad on a cool night, on the balcony of an apartment of some third world country and talking life. I encourage you to have these talks with your father. I hope I’ll be having these talks with him for many years to come… As always brothers, take care and take ownership….Spartan Ownership…