How to Live in the Moment 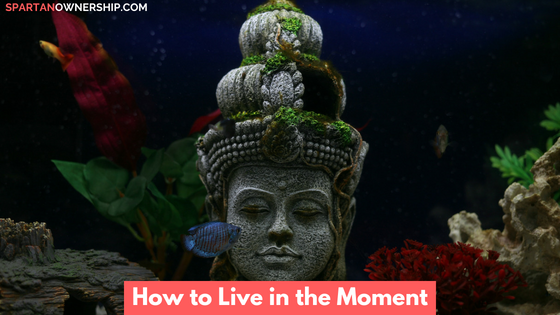 living in the moment

In order to live in the moment, you first need to realize that there are no ordinary moments…

“No ordinary moments” has been a concept I’ve heard from many sources. Notably, some of them were spiritual books on Buddhism and mindfulness. But the best source I ever heard it from was from Dan Millman’s book “The Peaceful Warrior” and his other piece “No Ordinary Moments”.

I’ve been applying this concept with great results. Let me explain the concept a bit further before I dive into the type of results it gave me:

What does it mean that there are no ordinary moments?

This is related to an article wrote about constantly evolving every moment. It basically means that there is no such thing as an “ordinary moment” because, by virtue of labeling a moment ordinary, you negate the opportunity at that moment to practice being present/evolving.

Practice what you ask?

Let me answer that question with the following story that Dan Millman told me when I met him at one of his retreats in Costa Rica:

Dan Millman once bought his mentor along with him to his gymnastics class (Millman was an athlete). Dan proceeded to execute a hard gymnastics move with near perfection. Sweating, he threw his shirt to the side and proudly looked at his mentor and said, “Well, what do you think?”. His mentor looked at him and said, “You were sloppy”. Dan was shocked, “What do you mean sloppy, I executed that move perfectly!”. His mentor replied, “Yeah but the way you threw your shirt to the side after you were done was sloppy.”

For most people ordinary moments include: brushing their teeth, walking to the store, waiting in line, dressing up, going to the bathroom, routine sex, smoking, stretching, waking up, taking a shower, drinking, eating, etc. Most people completely miss out on the opportunity to practice in those moments dismissing them as mundane…

Basically, a warrior demonstrates mastery and attention to everything he does. There are no ordinary moments for a warrior because he is constantly practicing whether he’s brushing his teeth or taking off his shirt. He uses those so-called mundane moments as opportunities to practice presence, breathing, and skillful movement. Doing so gives him the concentration to free himself from the shackles of his mind, increase his focus and perform at peak levels.

It took me around three years to understand the true meaning of “no ordinary moments”. Now I see the value and the results. Nowadays, I’ve increased my ability to appreciate/use supposed “mundane” moments as opportunities to practice mastery. For example: Now when I walk down the street, I practice being present to my environment by becoming aware of every little miraculous detail.

Not only do I never feel like I’m wasting time but I’m never bored either! I’m also a lot more identified with my witnessing/observing mind as opposed to my monkey mind which is constantly changing like the weather. I’m more grounded than I have ever been. It’s something that you have to experience for yourself to know what I’m talking about. Once you do, it’ll open up a new dimension in your life that will permeate every aspect of it.