Manly Jobs & Working with Your Hands 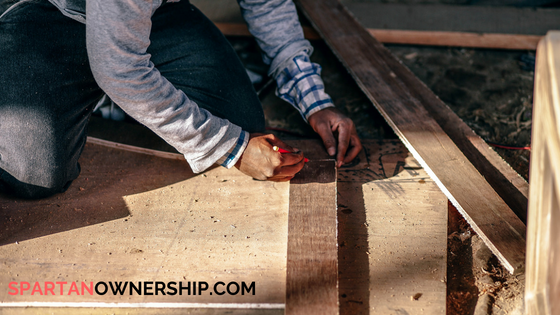 My outcome in this article is to give young men ideas on day-jobs if they’re having trouble picking something that pays the bills but also provides good skills and a more masculine environment.

I’ve had a few jobs over the years. I’ve worked in sales in a family-owned business. I’ve had my own online marketing company. These jobs had nothing to do with my true passion and were just a means to an end so I could have some money. They also required a lot of sitting down at a desk and office bullshit.

More recently after moving to NYC, I was a waiter in a high-end restaurant. This was more physical/social as it had me standing on my feet and talking to people but the environment was NOT masculine at all. It was in the heart of the most liberal and effeminate neighborhood of NYC. Going to work was like walking into a liberal nightmare with half the waitresses going to school for “gender-studies” or some other BS major. I felt alone…

As some of you may know, I go very impulsive recently and decided to quit my day-job in order to join the military (not the best idea). Then I backed out of joining the military last moment because, at the end of the day, I really didn’t wanna put my life in the hands of the evil-government.

This left me unemployed.

And I have been unemployed for almost 3 weeks at the moment of this writing.

Luckily, I have some savings I’m surviving on so I’m not totally desolate.

Anyway, in the past few days, I’ve been spending quite some time looking around for jobs and I couldn’t find anything that I was really qualified for besides going back to the restaurant industry which you already know my thoughts on.

I started to ask myself, what can I do as a day-job that would result in some practical skills and a more masculine environment?

So after some thinking, I came out with a couple of ideas; bouncer, construction, carpentry, martial-arts instructor, personal trainer, etc.

Being a bouncer sounds cool but I don’t like the idea of working late nights thus ruining my circadian rhythm.

Being a martial arts instructor is cool but I’m not qualified for it even with my 3+ years of training as of this writing.

Being a personal trainer is a cool idea but it’s a saturated industry and I really don’t wanna sit around with a bunch of over-weight women all day and motivate them to do lunges.

So I was left with construction/carpentry.

I started researching those 2 fields and ways to get started in them.

At first, all the information I found said that it takes years of schooling which kind of left me feeling discouraged because I’m unemployed! I need money now!

But then I found some forums where construction guys and carpenters were talking about how they got started. A lot of them were saying how they just started out on the bottom and learned on the job.

This gave me some hope so I picked up the phone and dialed away. I called several carpentry businesses near my area and found one that was at the local Navy yard. The owner told me to stop by.

When I got to the Navy yard, I immediately felt more at home. I walked around and saw a bunch of rugged men in construction outfits, ships, and other cool stuff. I mean it’s a Navy yard for God’s sakes!

Then I got to the warehouse where the owner was. We spoke for a while and he showed me around the shop describing the various power-tools and their uses. We got along pretty well and had similar views on the power of working with your hands. I was also impressed with his mastery and with the fact that he built his own house. That’s self-reliance. That’s manly.

I told him I had no experience but that I was willing to learn and help out as much as I can. He told me to come in next week on Monday and bring some construction shoes for protection and some clothes I wouldn’t mind dirtying and that he would start to teach me.

Now I finally have a chance to learn an actual craft in a masculine environment. These skills will translate into practical use throughout my life I’m sure. And I’m working with my hands and paying my bills. Fuck being a paper-pusher or some waiter at an effeminate fancy restaurant.

I haven’t started yet and a lot of things could change soon but still, it feels good knowing that pretty soon, I’ll be working with my hands, learning real-skills, and will be surrounded by men with similar values.

Anyways, I hope you guys got some ideas out of this. Are you like me and also tired of being a paper-pusher and/or working in effeminate environments? Then maybe it’s time to leave the office world and do something more manly.