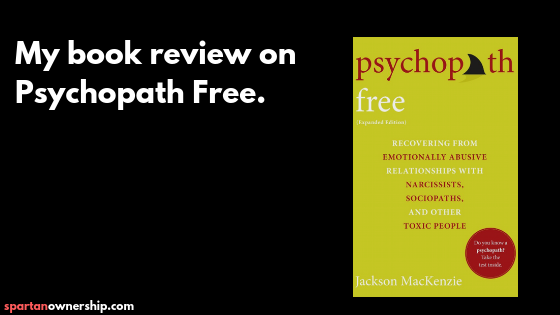 “Finding yourself involved with a psychopath is an adventure, that’s for sure. It will open your eyes to human nature, our broken society, and, perhaps most important of all, your own spirit. It’s a dark journey that will throw you into spells of depression, rage, and loneliness. It will unravel your deepest insecurities, leaving you with a lingering emptiness that haunts your every breath. But ultimately, it will heal you. You will become stronger than you could ever imagine. You will understand who you are truly meant to be. And in the end, you will be glad it happened.” – Jackson MacKenzie

Psychopathy in the context of relationships

Psychopath Free by Jackson MacKenzie is a well-written piece that gives you a powerful look into how psychopaths and people with other cluster B personality disorders function. This book is mainly centered on how these people act within the context of intimate relationships.

The following are a couple of insights that stood out to me the most:

Idealize, Devalue, Discard: This is the most common pattern that psychopaths engage in within relationships.

A few weapons in a psychopath’s arsenal:

The term is derived from the 1944 film Gaslight, in which a husband tries to convince his wife that she’s insane by causing her to question herself and her reality. (source)

Basically, gaslighting occurs when a person simply denies any manipulative behavior or evidence even when confronted with it. They get mad at you and act like you’re the problem. They call you crazy, insecure, and/or overly sensitive. As far as they’re concerned, your reaction to their behavior is the problem, not their behavior itself.

Psychopaths are very shallow beings. They also get bored very easily. They hate spending time alone because they feel extremely empty. Therefore they always surround themselves with fans who are quick to praise them. These relationships are usually never deep but rather based on shallow connections of one sort or another. They also leverage these social circles to create the effect of being desired more than they actually are.

Psychopaths are experts at mirroring your fantasies. They spend some time in “observation mode” where they gather intel on your deepest longings and fantasies. Then they model themselves as the perfect missing piece of the puzzle you’ve been looking for. They paint a mental image in your head that they are just like you and have all the same hopes and dreams. This is their method of blending in and hooking you. Once they feel they have you, they move on the next steps.

#4 Calls for Pity and Sympathy

Psychopaths have no conscience or empathy. They are cold and calculated creatures, almost reptilian-like. They have no capacity when it comes to taking responsibility for their actions. Instead, they make excuses and rationalizations for their behavior always blaming it on someone else, usually you AKA their target(s).

Psychopaths and Cluster Bs are more common than you think

According to the National Institutes of Health:

6 percent of the general population has narcissistic personality disorder (NPD).

5 percent of the general population has borderline personality disorder (BPD).

2 percent of the general population has histrionic personality disorder (HPD).

And according to Dr. Martha Stout: 4 percent of the general population has antisocial personality disorder (ASPD, sociopathy, or psychopathy).

It is wrong to think that these people are all locked up in jails too although a large number of incarcerated people are psychopaths. Most of these people walk among us every day. They are a lot more common than we think and can be found all over the places especially night-clubs and other highly shallow environments.

The above quote is half-satire but it does bring up an alarming observation which is that most women don’t respond to “nice-guys” or any kind of so-called beta behavior from men these days. Online dating, social media, and other sources of social validation and propaganda have completely blasted women’s egos into the stratosphere making normal communication very hard with women. A lot of what I noticed working on women in terms of seduction closely resembles the tactics that psychopaths use in this book. It was just an interesting observation.

Get more details and an in-depth read.

Buy the book on Amazon here.

P.s. Would like to make progress on your journey to self-mastery? Check out the Spartan Ownership shop here for badass tools, gadgets, and training courses that will accelerate your growth. Also, if you would like more personalized help with setting your objectives, book a coaching/strategy session with me here.

Something went wrong. Please check your entries and try again.
Posted in All Posts, Book Reports