A Conversation with a Former Special Forces Veteran 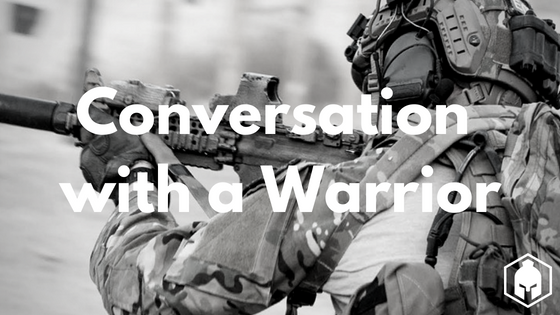 I had a meeting with a friend of mine today…a US Army Special-Forces Veteran.

I see him every couple of months or so.

Joe, my roommate and I all went to a café, sat down, and began to talk.

The conversation was great as we spoke about many different topics such as Taoism, Zen, masculinity, warrior development, survival, the government, politics, women, the value of a currency, artificial intelligence, and more.

Joe is a rare breed of man highly trained in the art of war yet humble and authentic in the way he carries himself. Never once did I get the impression that he was trying to hold his status as a tested warrior above me.

I like to meet with Joe…he’s a mentor to me. I like getting his perspective on things. Whenever I’m with him, I feel like my mindset becomes more powerful.

In society today, many young men are lost. They worship useless celebs who are modern day clowns and jokers. It’s time we start looking up to NOT idolizing warriors, sages, and entrepreneurs who challenge the status quo, add value to the world and seek to align themselves with Tao.

One thing in particular that we spoke about was transcending limitation. He told me that he had a book called The Art of Jeet Kun Do by Bruce Lee. Joe also likes Alan Watts.

Joe also mentioned that he’s glad I didn’t join the military which is interesting given the fact that he served at high levels. Like me, he doesn’t trust our government and doesn’t believe that the causes the modern army is fighting for are truly perpetuating freedom among the people.

We spoke about the idea of organizing events where men get together and train themselves to survive and thrive under pressure by learning martial arts, survival, and evasion. We also spoke about spirituality, meditation, and awakening from the matrix.

And one last thing; when you’re around men of that caliber, try not to over-speak. You may know a lot in theory but a theory is nothing compared to real-world experience. Ask questions, stay quiet, and absorb as much as you can. These men are not usually impressed by words.

“Who you are speaks so loud that I can’t hear a word you’re saying.”

For those of you that don’t know, I am currently doing a year-long challenge as of this writing. Click here to see what it’s all about.

The following are field notes on today so those who are following/interested can see my progress:

10 hours of sleep sure helped.

So did having an awesome time with my mentor.

Towards the middle of the day, I felt my brain get a bit foggy. I was kind of tired for some reason. I noticed the enemy of mental fog in my sights and decided to take a nap which definitely helped.

I ate a lot of carbs today which I don’t think is great for mental function so I need to discipline that but so far so good. I’ve been disciplined with everything else.

Something went wrong. Please check your entries and try again.
Posted in Insights from Mentors, Masculinity/Mindset