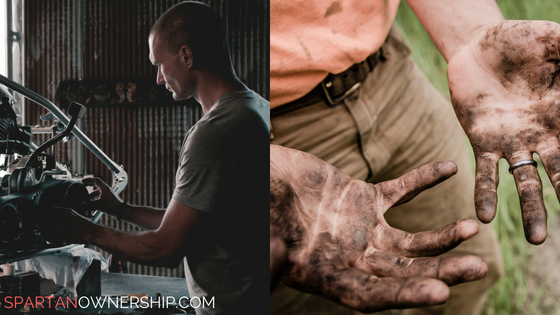 The more I advance forward on my journey of self-mastery, masculine character development and spirituality, the more I find myself gravitating towards self-reliance and learning how to master my environment.

More specifically, I find myself seeking to understand the everyday tools I use such as vehicles, computers, household appliances, and even my home in general.

They didn’t have a million subscriptions to services that were doing everything for them at all times. We live in a bubble…an illusion…a house of cards that is bound to fall short at some point and bite us in the ass.

And even if it doesn’t, what does that make us?

Today I’ve been pondering the idea of choosing my environment wisely as in choosing vehicles, appliances, and other equipment in a way that is optimal for self-reliance and mastery.

For instance, Tesla is going to take over the car-market soon and once it does, most guys will NOT have the expertise to repair even simple functions on it. Everything will need to be taken to specialized and highly advanced auto-shops. The same goes for the computers we’re using and the other array of technology in our lives.

So what’s the solution?

I’m starting to think that it might be better to go with an older car and actually learn the mechanics behind it and put yourself in a position where you can repair the most common issues that can occur.

The same goes for everything else…

Recently, I met 2 men who built their own homes and they both told me that there’s nothing more satisfying. They also had a particular quality to their masculinity that was undeniably powerful. It’s that cool calm presence of someone who knows how shit works and can handle it if it were to go wrong. These men aren’t so dependant on the outside world. They can handle their shit and that is manly…plain and simple.

Yes, this way of life takes time, energy, and discipline. It will require hard work and sacrifice. You can have anything but you can’t have everything. If you want to live in the matrix and have everything taken care of for you by your illusory daddy AKA government/corporations you can but at what cost?

This is the beginning of a new masculinity…

Something went wrong. Please check your entries and try again.
Posted in Masculinity/Mindset