Be Unapologetically Focused On Your Purpose 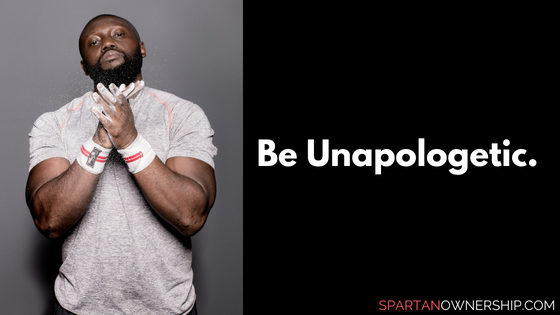 A few months ago, I met a guy named Alex at my MMA gym. Alex would often show up to class but would never participate. He would just sit on the bench and watch me and the other guys practice fighting.

One day, he finally geared up and participated in one of our classes. He was quite good actually. So at the end of class, I asked him: “Hey man, you look like you’re well trained. Yet, you often sit on the bench during class. Why don’t you train more?”

He went on to say that he was really into boxing and almost reached the golden glove level at one point. He then said that his girlfriend didn’t really like the fact that he fought. She would often be against him pursuing his goal of being a pro. Keep in mind that this guy was 33 years old.

Right away, it became clear to me that this was a classic example of “compromising your purpose for your woman”. This is often referred to as “the right thing to do” by ignorant mainstream culture. The problem is that most men give up on their purpose whether it’s for the women, a dead-end job, comfort, etc.

Rule number one in my book (and hopefully yours): Be relentless in your purpose. Don’t ever sacrifice your deepest truth. Every day, I remind myself: “I am grounded in my purpose and unapologetically so”. You have to remind yourself or you’ll be swept away by distractions and “so-called obligations”.

As counterintuitive as it may sound: Women don’t want you to listen to them anyway! Women WANT a man who is grounded in his purpose.

David Deida, in his book “The Way Of The Superior Man” says, “Every man knows that his highest purpose in life cannot be reduced to any particular relationship. If a man prioritizes his relationship over his highest purpose, he weakens himself, disserves the universe, and cheats his woman of an authentic man who can offer her full, undivided presence.“
So remember this for now on: Your Purpose Comes First and your woman comes Second. She doesn’t want to be the center of your life. Deep down inside this is how she truly feels. Deep down inside this is what makes her admire you.

Don’t be like Alex; a man who has lost countless years to a woman he was struggling to please. And do NOT be satisfied with understanding this knowledge on an intellectual level only. Seek to make it your reality.

After talking to Alex a bit more, he went on to say, that he was planning on divorcing his wife because she’d been a constraint on him for too long. That’s good because better late than never. The problem is: Alex is now 33 years old and missed out on tons of training and momentum. His wanting to please his wife came with a huge opportunity cost.

My dad is a good example of someone who stayed true to his purpose even late in his life. You can read his story here.

Right now, find out what your purpose is. Identify your potential barriers be it your: woman, mom, kids, social circle, etc. Then focus on your purpose despite any of their doubts or issues with your decision. Then when you are finished putting in the work towards your purpose that day,  give all of them your undivided attention. For they will appreciate you more too since you won’t be a miserable fuck with no direction.

Most people will REGRET their lives and die with their song still in them.

I too struggle at times when it comes to being focused. Your woman and the world constantly demand your attention. But don’t worry, it’s a gradual process. You will slowly have to be more and more relentless. You will have to become less delusional and act on the truth. And the truth is that “it takes time to fulfill your purpose especially if you are on a journey of fulfilling your potential. It will require sacrifice and the ability to say “no” and say it often.

The great ancient philosopher Seneca says, “People are frugal in guarding their personal property, but as soon as it comes to squandering time they are most wasteful of the one thing in which it is right to be stingy.”

Becoming a man who truly embodies this degree of focus is easier said than done. I will remind you, however, that the clock is ticking. This doesn’t have to take forever. Either way, you are 100% responsible. Don’t end up like Alex. A 33-year-old man who squandered tons of time to please a woman. A woman who respects him less for it. He wanted to be a boxer and is almost past his prime. BE SMART NOW.

It takes a degree of unapologetic, ruthless, Spartan focus to do this.