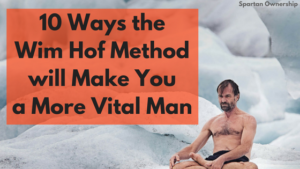 Wim Hof is by far one of the most badass men on the planet today. He is truly challenging everything we know about health and medicine with his groundbreaking practices. Wim Hof has developed a method that almost anyone can do to become superhuman and reach our peak potential in terms of health.

Who is the Mysterious Wim Hof?

Wim Hof is a man from the Netherlands who has trained his body, mind and spirit in tough natural environments, particularly under conditions of extreme cold.

Wim’s ability to withstand such extreme temperatures are due to a 3 pillar training system mainly composed of: “breathing”, “meditation” and “cold exposure”.

Wim’s impressive performance, especially under cold conditions, have earned him fame, along with the nickname “The Iceman”. His persistence in training has accumulated more than 20 world records, including the longest ice bath, climbing snowy mountain peaks wearing only shorts, running marathons around the polar circle, as well as many others.

I’m not going to write about how to do the method here because nobody can teach it better than Wim himself.

That’s why I suggest simply going on his website and taking his free mini-course. If you’re feeling like an ambitious badass and you want OPTIMAL health, check out his 10-week-course here.

He also has a fundamentals video course which I recommend checking out here.

So in case you’re wondering what exactly you will gain from practicing this method, here are the benefits:

The Spartans were only allowed to wear one item of clothing all year round. Spartans dismissed having too many layers of clothing as weak and feminine. They also believed that consciously limiting their garments made them more aggressive and vital on the battlefield.

The Wim Hof Method will result in a DEFINITE increase in mental toughness. You will start to become more and more comfortable in uncomfortable environments.

Whereas most people get the chills as soon as they leave their homes, you will be unburdened by the environment. How manly is that?

#2 Get High On Your Own Biology

When you tap into your own instinct…it is possible to get a slight natural high. The breathing techniques make fresh oxygen rush into your lungs filling every organ in your body with energy and vitality, especially your brain. This causes a release of adrenaline which gives your brain a feeling of euphoria.

Why get intoxicated off of substances with massive negative side-effects? Your biology has everything you need to change your mental state into a better one.

Cold-exposure training whether through cold showers, ice baths, or rolling in the snow trick your body into going in survival mode.

You begin to produce health promoting brown fat and become a super efficient fat burning machine. And this in turn, increases your growth hormone and testosterone levels.

Another benefit of the Wim Hof method is an increase in endorphins and happy hormones like dopamine. This is due to the increase in metabolic efficiency and oxygen intake.

Not to mention, you will also feel a certain pride in being able to take charge over your health. I believe that this gives you a psychological benefit that results in increased happiness as well. Why? Because you’re not some bitch that needs to be bundled up as soon as it gets a little chilly.

Wim has trained several elite athletes throughout the years. Their endurance levels and general condition have definitely been improved by following the Wim Hof Method. This method has resulted in better physical performance among various (top) athletes like Laird Hamilton, Allistair Overeem, Maarten Hermans and Janneke Vermeulen, among others.

The following is a quote from the National Academy for Sciences:

“Hitherto, both the autonomic nervous system and innate immune system were regarded as systems that cannot be voluntarily influenced. The present study demonstrates that, through practicing techniques learned in a short-term training program, the sympathetic nervous system and immune system can indeed be voluntarily influenced.”

Using his methods you can build up your immune system so that it fights off disease! You can also suppress your immune response if you need to too.

As you practice the breathing techniques,your blood gets filled with carbon dioxide from respiration, next a diffusion gradient is created, expelling acidic carbon dioxide with vital oxygen rushing into every cell of your body. This releases energy to your body in the most efficient way possible known to man!

Brown fat fights obesity because it compensates by burning calories to create heat. As we grow older, we have less need for brown fat and it is mostly replaced by white fat (“bad fat”).

Cold-exposure triggers the production of brown-fat in the body. This type of fat generates heat when the body is cold.

A study by van Marken Lichtenbelt et al. (2009) shows that overweight people had little or no brown fat.

Being relaxed in the face of cold exposure will train you to be cool under pressure. Also, the specific breathing techniques lower oxygen tension in your blood. This signals your brain to awaken every cell and blood vessel in your body. You will feel an increase in vitality and a decrease in tension.

You won’t have to load up on junk food or other sources of instant gratification to relieve tension anymore. Just reawaken your body back into a more harmonious state! This will also help you sleep better too!

After you get into the habit of cold exposure, your heart rate will drop significantly as the efficiency of your cardiovascular system increases. As a result, there is a lot less stress on the system.

Through exposure to cold you train the little muscles within your blood vessels. This will cause blood to flow more fluently through your vessels!

So there you have it. Wim Hof is not just another myth waiting to be debunked. He is the real deal! Currently, he’s being studied by top universities all around the world. And this is only the beginning!

Imagine a future where man has conscious control over his entire body! Who knows how far we will be able to take this. But with the information given to you here, you can already start to take massive control over your body!

So remember, there are now 3 pillars when it comes to health: Nutrition, physical exercise & cold exposure! If you make these 3 a habit in your life, then you’ll be way healthier and you won’t have to rely on big pharma to supply you with poisonous/destructive substances.

I believe that if a man wants to be more masculine, strong, happy and vital then he will benefit immensely from these practices. Wim Hof’s methods should not be taken lightly. They should be applied with seriousness and discipline in order to get the rewards.

Keep up the progress,

P.s. Once again, check out his courses here and here.

We use cookies to ensure that we give you the best experience on our website. If you continue to use this site we will assume that you are happy with it.AcceptPrivacy policy